To support the millions of children lacking the basic early learning skills to succeed in school, the U.S. Department of Education’s Ready To Learn Television grant has funded, for the past two decades, the development of educational television and digital media targeted at preschool and early elementary school children and their families, especially those who live in low-income communities. Under this federal grant, CPB and PBS KIDS work with producers, researchers, local public media stations, and other partners to develop, distribute and evaluate PBS KIDS multiplatform content – including television programs, video, interactive games, mobile apps and hands-on activities – to engage children, families, and educators in learning experiences at home, in preschool, and in out-of-school settings. 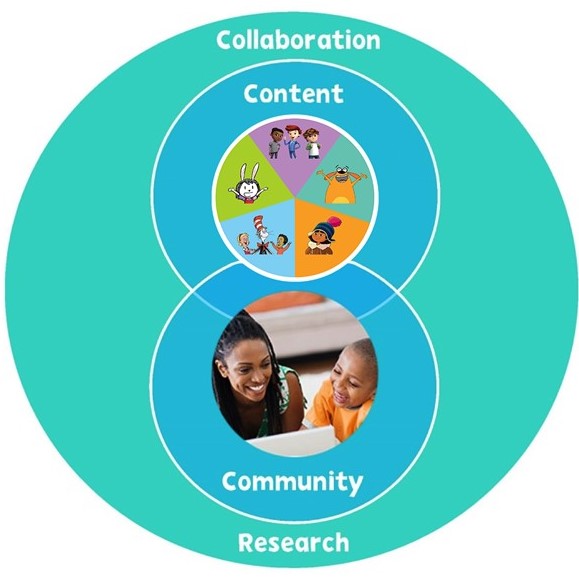 In this grant cycle, CPB and PBS are working with early learning experts to create experiences that expose young children to career and workforce options and help them to build vital functional literacy, critical thinking, collaboration, and "world of work" skills and knowledge. This effort will also empower and equip parents, caregivers, and communities to support children's learning and growth in these areas to put children on a path to lifetime success. This grant is funding three new multi-platform television series and connected digital experiences, four new short-form video series, two new podcasts for children and families, and digital and real-world hybrid learning experiences that support intergenerational and family learning at home, in virtual spaces, and in the community. Local PBS stations will work with diverse community partners as part of a network of Learning Neighborhoods devoted to supporting the early learning needs of children in low-income communities, and the Education Development Center (EDC) will lead a research effort to assess the success of the five-year initiative.

In this grant cycle, CPB and PBS worked with experts in early learning to create science and literacy-based television series, videos, games, mobile apps, and engagement resources. The grant funded new content for PBS KIDS series such as The Cat in the Hat Knows a Lot About That! and Ready Jet Go! along with a new science version of the PBS KIDS for Parents Play & Learn app and innovative short form videos from The Ruff Ruffman Show. PBS KIDS also launched two Ready To Learn series: Molly of Denali, focused on informational text literacy, and Elinor Wonders Why, focused on scientific inquiry. CPB and PBS leveraged this content by developing personalized and adaptive learning experiences for children and supports for parents, caregivers and educators.  Local PBS stations and community partners around the country used this content and related resources in the neighborhoods that need them most. Independent evaluations of the project's major media properties demonstrated that children learn the targeted knowledge and skills from the presented content. Recent data from the CPB-PBS Ready To Learn Initiative indicates that 15 million children watch RTL-funded science television content, and 19 million children use STEM games and mobile apps. The Ready To Learn Initiative: Improving Children’s Science and Literacy Learning Through the Power of Public Media summarizes the accomplishments of the CPB-PBS Ready To Learn Initiative (2015-2020). Further information and links to content and research reports can be found on PBS LearningMedia.

The 2015-2020 Ready To Learn grant supports the development of two new multiplatform series:

Molly of Denali, produced by WGBH Boston with animation collaborators at Atomic Cartoons for PBS KIDS, centers on Alaska Native Molly Mabray, a feisty and resourceful 10-year-old who brings viewers along for adventures in America’s 49th state. With a curriculum grounded in informational text, Molly of Denali also emphasizes family and intergenerational relationships and Alaska Native values. Ready To Learn is funding 38 half-hour episodes, a one-hour special, a digital app, online games, and hands-on resources for children ages 4-8, families, and educators.

Elinor Wonders Why, created by Jorge Cham and Daniel Whiteson and produced in partnership with Pipeline Studios, will launch on PBS KIDS in September 2020. Elinor, the most observant and curious bunny rabbit in Animal Town, will introduce children ages 3-5 to science, nature and community through the adventures with her friends. Ready To Learn is funding 40 half-hour episodes, digital games, and hands-on resources for kids, families, and educators.

Additional content and resources, including professional development tools and out-of-school learning materials, can be found on PBS LearningMedia.

EDC and SRI International continue to show positive gains not only for children, but also for their families and educators, and public media station communities.

Between 2010-2015, CPB and PBS collaborated with numerous partners to produce, evaluate, and disseminate a collection of evidence-based educational media and learning resources to advance the math and literacy skills of young children, particularly those in low-income communities.

RTL math and literacy content is rigorously tested and evaluated at every phase of development and implementation by experts to assess its impact on children’s learning.  More than 100 research and evaluation studies completed since 2005 show that this content engages children and enhances their early learning skills, and that children can make significant academic gains when taught through a combination of media.

Recent studies by EDC, SRI International, and WestEd continue to show positive gains not only for children, but also for their families and educators.

US Department of Education Disclaimer