Are We Poised for Another 1967 Moment?

Two plans were unveiled this week seeking to bolster the sources of local news in the U.S.  Both could have significant ramifications for public media.

The Rebuild Local News Coalition proposed a detailed menu of tax credits, matching donations, service-journalism opportunities and support for “replanting” news organizations with new owners. All the ideas are aimed at increasing the number of local-news journalists and the revenue for newsgathering. They note, in particular, that the number of reporters has declined by 60% since 2000 and some 1,800 communities now have no local news outlet. 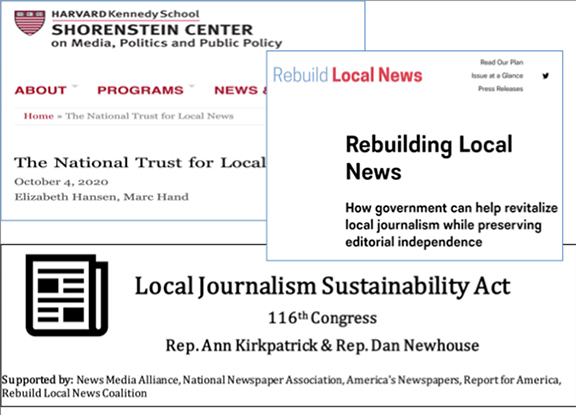 The National Trust for Local News, a proposal stemming from research by Harvard’s Shorenstein Center for Media, Politics and Public Policy, advocates for the creation of a new nonprofit entity that would help news outlets transition to new community-focused owners via a pool of capital mostly raised from tax-exempt bonds.

Along with proposed legislation now in Congress, the Local Journalism Sustainability Act, the current level of activity to help distressed journalism organizations rivals the efforts to pass the Public Broadcasting Act of 1967, which created the Corporation for Public Broadcasting (CPB) and paved the way for taxpayer support of public radio and television.

“I think this could end up being a 1967 moment,” said Steve Waldman, founder of the Rebuild Local News coalition, especially if the Senate or White House flip in next month’s elections. “There could be a real focus on helping local news in a dramatic way.”

Notably absent from the coalition, however, is CPB.  To be sure, childhood education and cultural programming fuel the federal support for public media more than local journalism does.

Shana Teehan, CPB’s vice president for communications, when asked about CPB’s support for the coalition, said: “CPB supports efforts to strengthen local journalism and address news deserts. However, CPB does not take positions on legislative proposals or lobby for or against legislation.”

CPB is federally funded and prohibited to engage in lobbying activities.

Pubcasters have felt the same squeeze as commercial and other nonprofit news organizations have as underwriting and donor support have dipped during the COVID-19 crisis; many have downsized staff as a result. CPB has received extra federal support to help.

One source involved in the Congressional deliberations said CPB may be skittish about signing on, especially in today’s polarized political climate where some members of Congress openly advocate cutting support for public media.

“CPB may be in sync but might be afraid to do anything to re-open the Public Broadcasting Act,” the source said.

Still all journalism organizations doing local news, including public broadcasters, stand to benefit from this week’s proposals. And many public radio stations, in particular, have been trying to expand their local-news offerings.

Among the plan’s key elements are:

Nearly all of these proposals would benefit public broadcasters, some significantly.

The proposal for a National Trust for Local News seeks to address what it describes as both a business and a legitimacy risk for local newspapers. It is particularly aimed at hedge-fund- or private-equity-owned newspapers that are hollowed out by cost cutting aimed at increasing returns for investors. But it could also apply to public broadcasters seeking to spin off from their university owners that can no longer afford to support them.

In proposing to raise a pool of national capital to help news outlets transition to new, community-focused owners, the trust compares its efforts to what Public Radio Capital (now Public Media Co.) did starting in 1996 to help preserve and expand public radio when religious broadcasters became ready buyers for troubled stations. The trust would also help news organizations move from commercial or philanthropic forms of ownerships.

Earlier brainstorming had put forth the idea that CPB could transition to a Corporation for Public Media and be the umbrella organization that supports other forms of nonprofit media.

That idea seems to have lost some traction in current suggestions.

All in all, it’s an interesting moment for CPB. It can decide to lead into the future, which may be a risky path. Or double down on what it is doing.