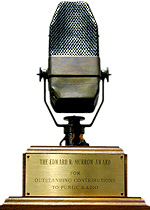 Since 1977, the Corporation for Public Broadcasting has recognized outstanding contributions to public radio by presenting the Edward R. Murrow Award. This award honors individuals or organizations whose work has fostered the growth, quality, and positive image of public radio.

During three decades in broadcasting as reporter, producer, executive, and government official, Murrow was an outspoken advocate for responsible, courageous, and imaginative use of the electronic media. These principles apply particularly to public radio and to those who have helped shape its direction.

Murrow Award winners' contributions and achievements may have occurred over many years or during a short period of time and can include any facet of public radio. Individuals need not be professionals in public radio but should be active in promoting this unique informational and cultural resource.

Executive director of the Rocky Mountain Corporation for Public Broadcasting

First CPB Director of Radio Activities
Creator, On the Way Home, forerunner of All Things Considered